haha, i was checkin out the register, when i stumbled on a review on the ipod shuffle. i started reading it and half way down there is a bit about how ipods can sence stuff, and prefer different types of music?

i feel quite stupid saying this, but i dont no if its bollocks or not!

“Revere Greist, a doctoral student and amateur bicycle racer in Los Angeles, has concluded that his iPod’s Shuffle command favors the rapper 50 Cent – and perhaps more important, that it knows exactly the right time to play 50 Cent’s biggest hit, “In Da Club.” He finds the dramatic beat, coupled with the lyrics “Go Shorty, it’s your birthday,” inspirational.”

now i own a ipod, and it obviously has a shuffle option on it, and i have to say that a lot of the time i wonder if it does pick specific tracks out, as the same 50 or so tracks get played ALL the time?!

but thinkin about it logically, it cannot be true, so it must be conicidence.

there are a lot of people saying that their ipod (for example) like rap music, but on further investigation 8 out of 10 tracks on the person ipod would be rap music, so its hardly coincidence!

but it does remain a mystery, as mine DOES appear to prefer types of music! 🙂 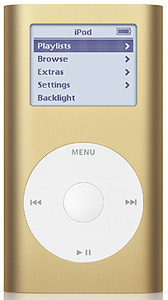 All the content here is copyright the website owner. I cannot be held responsible for any ramifications occurring as a result of you using any of the information on this website.